We are currently running two active campaigns and are in the research and development stages of a third campaign:

The COVID pandemic brought our public bus system to the brink of collapse. Many routes and service hours that were cut still have not been restored. Ridership has dwindled due to infrequent service and high fares. Exacerbating the issue, AC Transit’s hiring freeze over the pandemic has resulted in a transit worker shortage requiring rapid hiring and training in order to even have enough drivers to bring bus service back to pre-pandemic levels.

Fortunately, over $110 million in federal rescue funds is on the way to AC Transit– the transit agency has already received $66 million, and will receive another $44 million this fiscal year. This money is intended to restore public transit and yet AC Transit is not taking the rapid action required to spend these funds in order to get transit back up and running. AC Transit has instead been implying that they may keep the money in the bank for future budget shortfalls.

This is why riders and transit workers demand that:

At the People’s Transit Alliance, we are organizing regular canvassing events where we are talking to riders about these priorities and listening to their experiences both before and during the pandemic. We ultimately want to support the development of a class consciousness of workers and riders that has the power to demand and fight for a transit system that meets their needs.

Email us to join our next canvassing event and sign onto the demand at tinyurl.com/ridersbudget

Transit workers cannot work from home. Since the first outbreak of COVID-19 in March 2020, front-line workers for transit agencies in the Bay Area have risked their health and safety to keep our cities moving. They have worked under constant fear of getting sick, and many have had to severely limit - or completely eliminate - time spent with children, grandchildren, family members and friends due to the risk of spreading COVID-19. In addition, front-line transit workers, like all essential workforces in the Bay Area, are disproportionately POC, and are therefore already more vulnerable to getting sick and dying from the virus. While Black workers make up only 6% of the Bay Area’s essential workers, they make up 23% of all transit workers in the region.

Transit workers are often referred to as front-line essential workers, who provide a critical service for our cities and metropolitan regions. During the pandemic, this was even more evident, as the continuity of transit service was necessary to meet the needs of riders who used transit services to access health services, work sites, grocery stores and other essential places.

As transit in our region begins to expand back to pre-pandemic levels, we must center the roles of front-line transit staff. Providing hazard pay is a necessary action to compensate transit workers for the physical and emotional trauma of working during the pandemic. Despite the praise that transit workers from all major Bay Area transit agencies have received, only San Jose’s VTA has awarded them any kind of material benefit for sacrifices made during COVID-19.  This is why transit workers around the Bay Area are making their voices heard and demanding that they receive retroactive hazard pay from their employers.

The People’s Transit Alliance stands in solidarity with transit workers demanding retroactive hazard pay. We have been supporting local chapters of the Amalgamated Transit Union, Local 192 and 265 by capturing the stories of individual workers and raising awareness of this campaign. By listening to their demands, discussing and assisting with the development of targeted strategies including the organization of rallies, we hope to win this campaign and get hazard pay for transit workers around the Bay.

Some promising results so far are ATU 265’s recent contract agreement which includes a $3,500 “appreciation bonus” and 10% raise over 3 years. This comes in the wake of a union-led, PTA-supported hazard pay rally on October 22nd, 2021.

Past Campaigns and Actions

In March 2021, the Bay Area received $1.7 billion in American Rescue Plan funds in order to support transit agencies in recovering from the impacts of the pandemic. The Bay Area Metropolitan Transportation Commission (MTC) delayed the distribution of this lifeline for months, implying they might save these funds for an unknown “rainy” day, failing to see the dire state transit agencies have been in and how that “rainy” day is now. We began pressuring the commission through a variety of tactics including watchdogging meetings, running a communications campaign and mobilizing a coalition of transit advocates.

This article we wrote shares more context on MTC’s delay and it’s implications.

Our efforts culminated in a rally on May 6th, you can the documentation of it here. 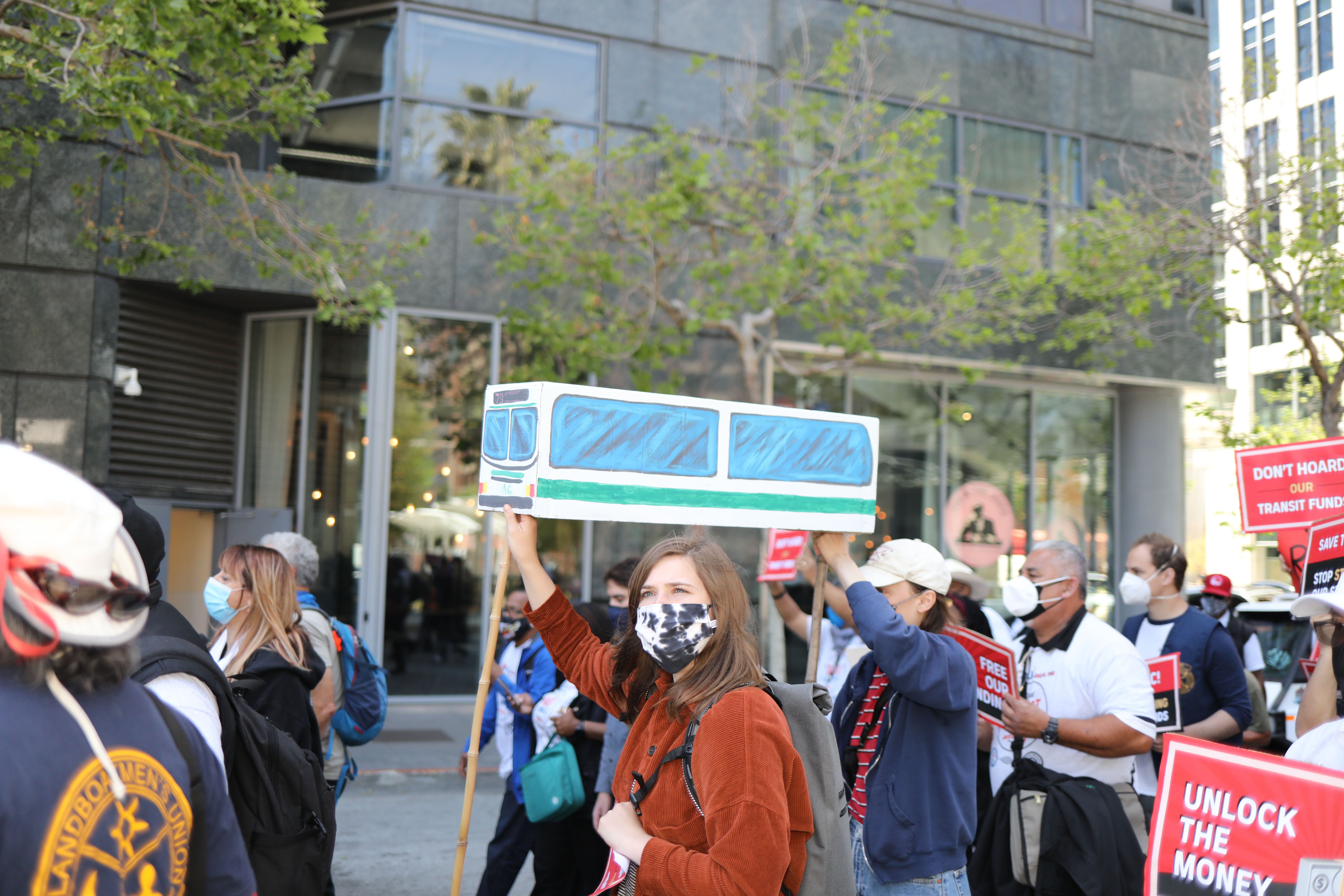